Whilst we and our boats are patiently awaiting the day that we can sail out of the harbour again and let our guests submerge in the world of whales, we know that life has returned to Skjálfandi Bay over the past weeks. Charla Basran, a former guide of Gentle Giants, who is researcher and project manager at the research center in Húsavík, has been going out with her crew of researchers throughout the last weeks. During their tours, they managed to collect data of several whale species that have come to Skjálfandi Bay since we last went out ourselves for whale watching.

Even though especially in the first two months of whale watching many different and at times also rarely seen whale species enter this bay, humpback whales remain our most common sight throughout the season. So far, 15 different humpback whales have been counted by the researchers since early March. Eight of these individuals turn out to be re-sights, which means they have been seen in this bay before. Most of them appear to be re-sights from 2019, whilst at least one individual has been identified already in 2011.

Some humpback whales end up staying in the bay for days, maybe even weeks or for more than a month. Therefore, it happens that we might encounter the same individual more than once on our tours or even recognise it from another year. Humpback whales can be identified as an individual by the black and white pattern on the underside of the tail, which is comparable unique as our fingerprints are. Some passengers that have been with us in the last years might remember a guide telling them: “Hey, I know that whale!” In fact, as some of the animals keep returning to our bay, several have received names over time. As of the eight re-sights so far, six are named in the catalogues of the research center: Vase, Seymour, Treasure, Zen Attitude, Vose and Pär- Åke.

On the photo below you can see the pattern of Zen Attitude. The research center is collecting data of each year’s whales in catalogues. The identification can shed light on various questions: Not only does it unveil whether individuals keep returning to the same places every year, but as the same animal might as well be photographed elsewhere around the world, it gives a further insight into the animals’ migration patterns and changes in behaviours. Last, it contributes to getting a more precise estimate of the size of a population: the identification combined with further research have led scientists to estimate that there is about 9867 humpback whale individuals in the Central North Altantic.

Photo and provision of research data by Charla J. Basran 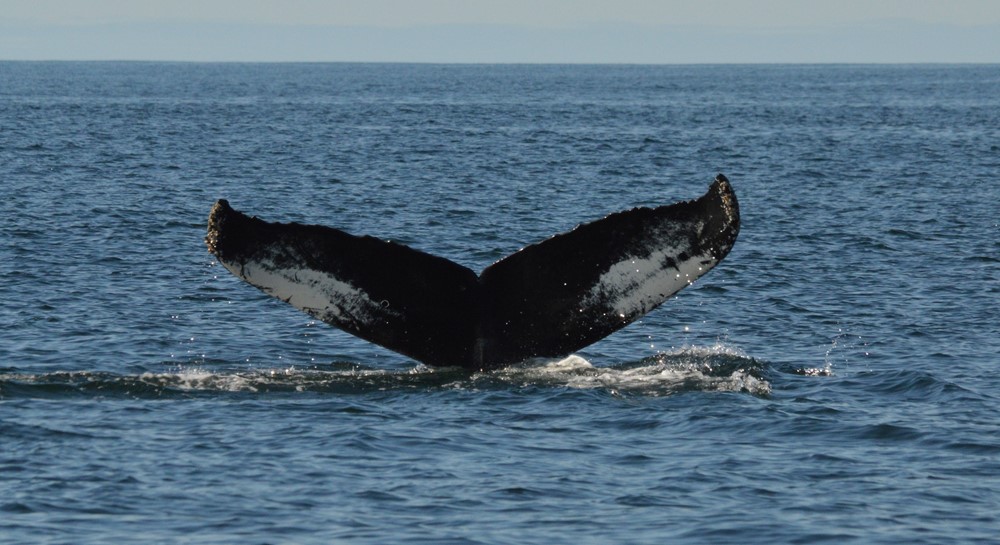 What kind of boats do we have?

Get to know our fleet